Improving a key route through Florida

Route 98 crosses a highly populated area noted as a tourist destination, whereas to the north it joins up with I-10, a highway that connects the Atlantic to the Pacific, the most southerly of the several coast-to-coast routes across the US.

A key section of the US 331/SR83 route that needs to be improved is the 6.4km stretch crossing the Choctawhatchee Bay. The Choctawhatchee Bay extends for around 65km, covering an area of 334km2 and forms part of the Emerald Coast region, which is located on the Florida Panhandle in the north-western part of the state. This road is critical, especially for local transport, because it is one of the main road links to the Emerald Coast.

However, it has to carry heavy traffic volumes of both commercial and private vehicles at present and congestion can be severe at times, resulting in delays for drivers. The route was first opened to drivers in the 1950s and vehicle numbers and distances driven have risen enormously since then, so the road is understandably having to cope with traffic volumes that far exceed its capacity at peak periods.

US 331, which features only two lanes for the 6.4km stretch crossing the Choctawhatchee Bay, also has an important function as an emergency route. In case of evacuation due to a hurricane alert, it is the only major escape route by road from the Santa Rosa Beach area to points north. The area is densely populated and especially during the high season when tourists or those with second homes in the area tend to be in residence.

However, this is when there is a risk of hurricanes and storms and as a result, when the road is likely to have to cope with huge numbers of vehicles leaving the area in a hurry. As a result, the Florida Department of Transportation included US 331/SR 83 on the priority list, and for this specific project it applied for and received financial support from the federal government in Washington through the Tiger II program (Transport Investing Generating Economy Recovery).

The upgrade project called for two new lanes to be added to the current 6.4km section comprising the causeway and bridge. The work has also included a new bridge to the east of the 3.7km-long Clyde B Wells Bridge. The widened four lane causeway will carry traffic to and from the bridges, and from both south and north sides. The road widening project also includes that ground be prepared for a park and recreation area at the very end of the embankment on the south side.

When the construction work is completed, the new bridge and widened causeway will be used to handle the traffic driving northwards, while the existing causeway and bridge will carry the traffic heading south.

The US$118.5 million design-build project was won by a joint venture team comprising Skanska and Parsons Brinckerhoff. The two partners are directly overseeing construction of the new bridge as well as the four lanes of the causeway. The partners are also carrying out all the temporary works to ensure that traffic flow remains steady during the construction phases.

The project to widen this 6.4km stretch is not without its challenges however. Because the water table is high, the ground conditions are difficult and require extensive preparation to ensure the roadway can be constructed properly. For this portion of the project, a specialist firm was brought in to handle the work by the joint venture partners.

Italian company Treviicos, part of Trevi Group, through a subsidiary, Treviicos South (TIS), is handling this important link in the chain and carrying out the necessary road foundation improvement work for the upgraded road connection.

The piling task has been assigned to a Soilmec SR-90 TTM (TreviTurboMix) drilling rig that can produce a double column by overlapping two elements, which is similar to the layout of secant piles. During some stages of the work, a second machine has been used in tandem with the first to speed up operations and also to help minimise the impact on traffic. To allow production of two columns at a time, the SR-90 in the TTM (TreviTurboMix) version is fitted with twin injection systems and features two shafts driven by two rotary heads delivering a torque of 179kN.

The machines are also equipped with a control system that regulates the flow and quantity of injected material arriving from the mixing plant. The SR-90 also features the DMS system, which enables monitoring of functions such as rotation speed, torque and depth, and the principal mechanical and hydraulic components of the machine. This helps the contractor monitor working performance and ensures that the work complies as required with all the various parameters and project specifications.

The drilling position system (DPS) meanwhile delivers correct positioning of the columns on three axes to guarantee their verticality. 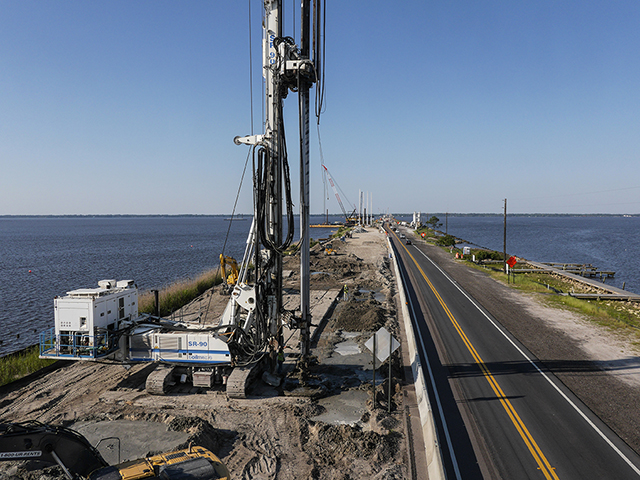 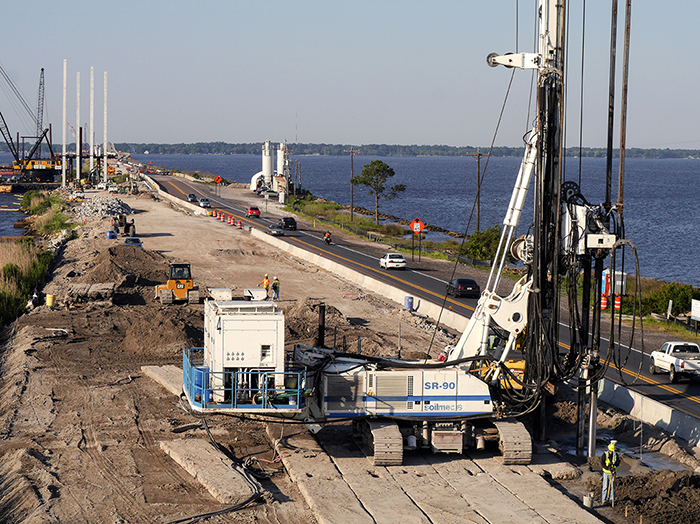 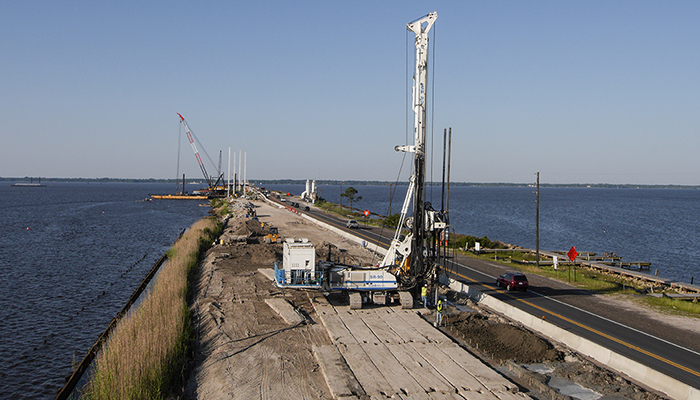