On the wake of the sound economic growth of the last few years, the real estate market in the Czech Republic is currently one of the most prosperous in Europe. The construction of new buildings and the improvement of infrastructures paved the way for companies - once located outside Prague to take advantage of low rent – to move back to the center of the Bohemian capital.

One of the major administrative projects is called "Rustonka development" and is located in Karlín, a municipal district area of Prague 8 bordered by the Vltava river (formerly an independent city that was annexed to Prague back in 1922), a place that is becoming quite popular both for companies and residences. The project involves the redevelopment of a former industrial area that used to house a nautical production complex later turned into a railway one and finally demolished in February 2014, when the demolition of the last octagonal chimney took place. The Rustonka project involved the construction of administrative and multifunctional buildings covering over 33,000m2 of office space. In 2018, the investor J & T REAL ESTATE CZ, after its excellent experience with the construction of the first three buildings, started the excavation works for the foundations of the building named "Administrativní budova Rohanské nábřeží", located in front of the Invalidovna metro station, which was part of the phase two of the project called "Rustonka development II". The building, which will be built by the association signed between the Geosan Group and Metrostav a.s., will consist of eight stories and will host the new J&T Banka headquarters.

The job site covers a total area of 32.5mx116.5m and involves the driving of sheet piles along the perimeter of the future building and the construction of over 100 foundation piles drilled up to a depth of 24m, 15m of which are cased. From a geotechnical point of view, the job site soil is characterized by a first layer of backfill that mainly consists of gravel and debris deriving from the demolition of pre-existing structures. Then, there is a layer that is about 2 or 3m thick made of younger sediments of the Vltava river, mainly composed of clay with low plasticity and coarse and grainy sand followed by 8-10m of gravel with large grain size (between 3 and 8cm and peaks of 12cm) mixed with fine soil (silt and clay). The lithification of these soils has led to the formation of a series of rocky layers with different thickness, mainly composed of slates, shales, siltstones, marls and sandstones that interlay the soil transversely. From the depth of 15m on, the ground is finally characterized by slate while the level of groundwater is set at about 6m.

Bored piles have a diameter of 900mm and were performed by means of the cased bored pile method. Casings were driven into the ground directly by the rotary head: this is the reason why the Soilmec hydraulic rigs SR-60 and SR-65 EVO used in the project were fitted with a winch crowd system that allows using the entire stroke available along the mast, with the direct advantage of being able to use long casing segments while driving and the possibility of extracting the whole casing in a single passage.

The rig arrived at the job site in its special transport configuration, complete with Kelly bar, and only 30 minutes elapsed from the arrival of the truck at the job site untill the first excavation began. The average site production was good, with two piles a day per an eight-hour shift in a soil composed of compact clays with the presence of very compact layers interspersed with gravel and boulders. The rig ergonomics was especially appreciated and it was guaranteed by the spacious cabin with a sliding door, its low noise (105db (A) guaranteed), the stability during the driving and casing extraction phases and the several technological solutions installed, from the automatic return to the hole center to the start and slow system of the Diesel engine capable to reduce consumption and emissions. With its total weight of 65 tons, the new Soilmec drilling rig has been designed to offer easy assembly and quick installation on site, since it can be transported complete with a telescopic Kelly bar directly mounted on the mast. It is powered by a Diesel Cummins QSL9 engine capable of delivering 261kW power, which can be set to offer a surplus power of up to 283kW, hence allowing the drilling operator to easily deal even with the most demanding situations.

Special care was devoted to the design of the rotary table and the crowd system available both in the cylinder and winch versions. The rotary head design is flat, compact and light, with a maximum torque value of 258.5kNm; this last feature allows obtaining excellent results even in the presence of very compact rocks and soils; moreover, with regard to the debris discharge system, two systems are available: the Soilmec spin-off system, which by exploiting the kinetic energy of a very high rotation speed (up to 135rpm) is unparalleled when using the auger, and the new click-click system that is particularly appreciated when using the bucket in very cohesive soils. The cylinder crowd system, with its 280kN extraction force, is designed with a double positioning on the drilling mast that allows using the whole stroke available both when using large diameter tools - thus working under the lower part of the mast – and when using long casing. As mentioned above, the rig can be optionally equipped with the winch system, hence allowing a stroke of over 16 meters and above all a 330kN crowd force that is perfect in order to have cased piles directly performed by the rotary.

The design of the machine is solid and compact at the same time, with a tail radius of just 3750mm, which makes the SR-65 EVO suitable to be fit with 16,5m long telescopic Kelly bars in order to drill up to a depth of 77,9m with friction Kelly bars and at 62,5m with mechanical locking bars. The continuous flight auger version allows the installation of an 18m long auger battery, tip excluded, which - together with a 7m sleeve extension - can drill piles up to a maximum depth of 25,9m. 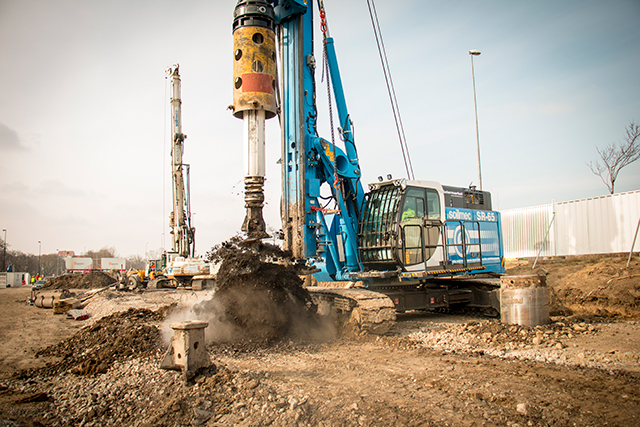 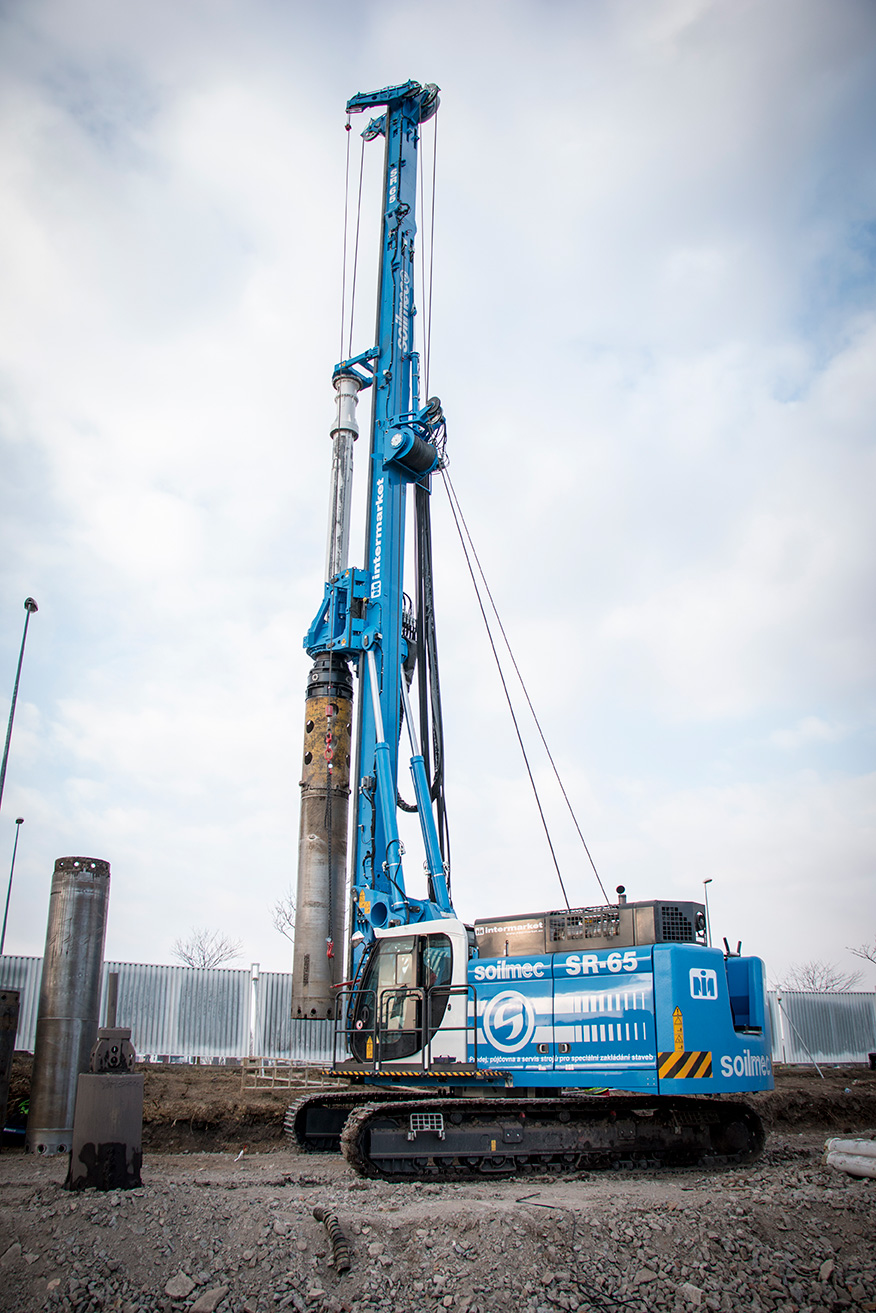