The job site is nestled in the Landstraße municipal District, a heavily populated urban area with many residential houses in the southeastern city center of Vienna. Located at the intersection of Rennweg-Landstraßer Hauptstraße, the construction site is limited by the Otto Preminger-Starße and Fred-Zinnemann-Platz – close to the Belvedere complex, a popular tourist destination with a world-famous 18th-century castle, gallery, and gardens.

The project foresees the construction of four single buildings with 8 or 9 floors for a total of 400 free-financed freehold flats, as well as underground parking for about 300 cars. Open passageways will allow easy access to the shops and supermarket located on the ground floor.

The entire “Trienna” project development was awarded to BAI Bauträger Austria Immobilien GmbH and the construction works of the housing complex was contracted to ÖSTU-Stettin, an Austrian construction company. ÖSTU-Stettin has entrusted the foundation work to Keller Grundbau Ges.mbH, a special foundation engineering company. The project began in late September 2015 and is expected to be completed by the end of 2017. It will involve the construction of underground foundation piles, slurry walls, and anchors.

The geology of Vienna strictly depends on its geographical location at the western margin of the Vienna Basin, a sedimentary region formed by the lateral extrusion and tectonic movements between the Eastern Alps and the Western Carpathian, and by the sediment deposition and debris flows of the Danube River that borders the downtown. Vienna’s subsurface consists of cumulative layers of sand, silt, and clay within gravel sequences. The specific job site is characterized by a 1.5 m top layer of compacted fill material, followed by medium to coarse calcareous sandy gravels deposited along the ancient course of the Danube, with a depth up to 15 m and an increase of sand intercalation within gravel units in the first meters. This strata is underlay by a deposit of medium to high plasticity silty clay with gravel, as well as cobbles in the last meters.

Due to soil conditions and project needs, the segmental cased bored piles technology was selected to perform the foundation piles. Spread along the whole job site area, the piles have a diameter between 600 mm to 1200 mm and a depth from 25 m to 33 m, cased for 15÷20 m. The Soilmec SR-75 used on this job site is the 70 tons class hydraulic drilling rig that is part of the new Soilmec SR Advanced product line. The machine is equipped with an upgraded crowd winch system and an optimized number of blocks and tackles. It can transmit a high force value with a long stroke on mast, allowing it to drive long steel casing sections. The boreholes were drilled by using a straight 2.5 m long auger, rock teeth, and 4 x 9 m telescopic mechanical locking kelly bar. Driven directly by rotary head, the casing is composed of 4-m-long double wallet sections that are mechanically connected to each other with bolts fixed manually.

An underground train line crosses below the entire length of the jobsite, complicating project. In fact, the project will likely need specialized reinforcement cages for all the piles adjacent to existing train line structure, in order to limit the vibrations and prevent any possible collapse. These cages consist of two sections – a standard cylindrical bottom section, and a top section with a smaller diameter completed with an external polystyrene cover. In addition this section is finally wrapped with a stretch film.

The SR-75 ADV, employed for the execution of piles with 900 mm diameter, showed immediately a great driving ability – due to the mechanical performance of the new crowd system with a pull up force of 408 kN and the new rotary head with 290 kNm torque. Furthermore, the rotary head is equipped with the high speed soil discharge system, “Spin-Off,” which guarantees in cohesive soils a perfect cleaning of the tool in a very short time, recovering up to 5 seconds for each discharge session.

A special thanks to Mr. Václav Stejskal and Intermarket staff. 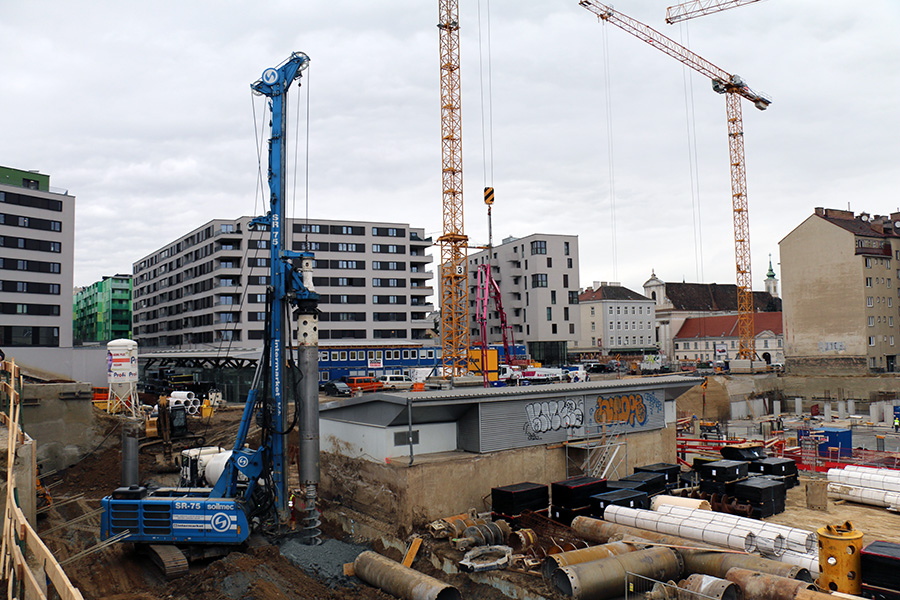 “Trienna” project in the middle of Vienna's municipal districts 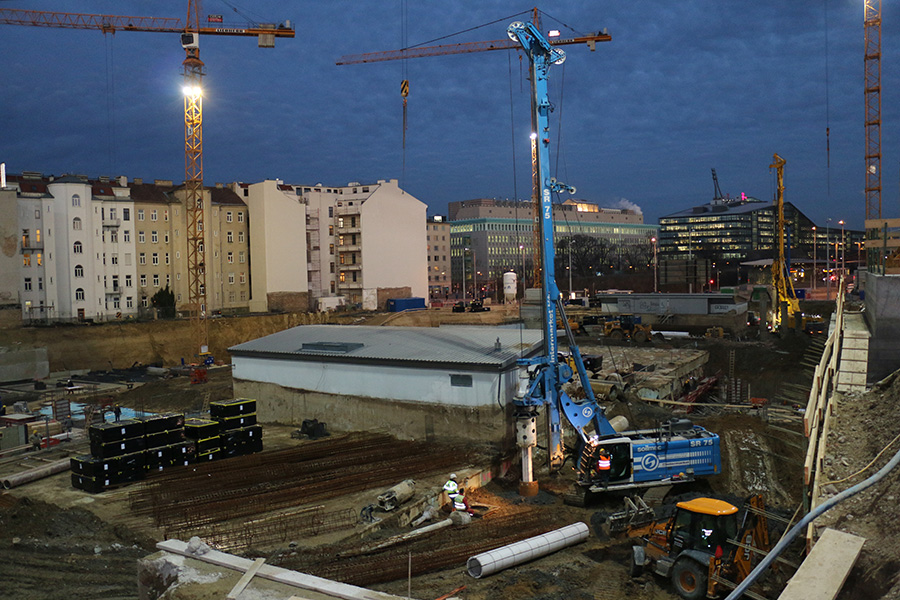 Side view of the job site area 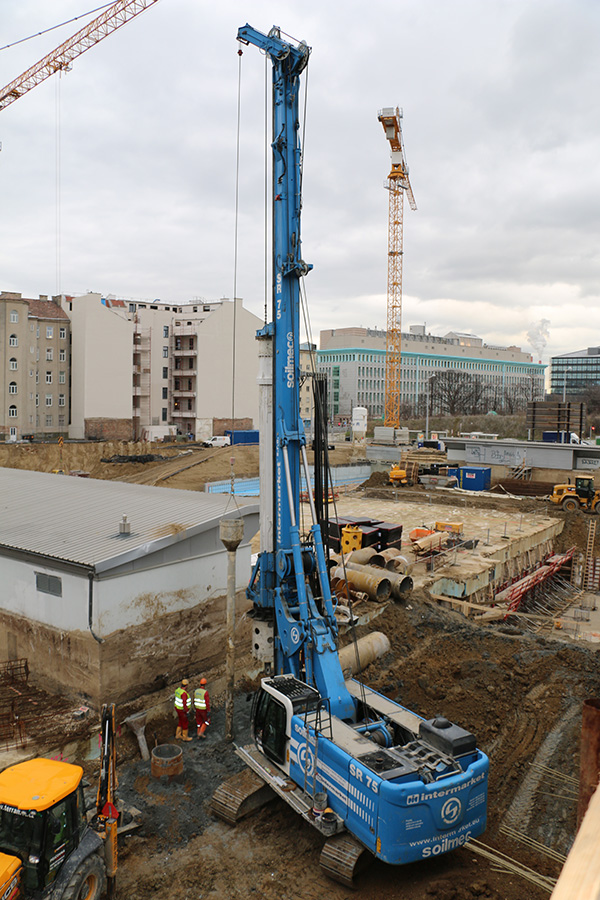 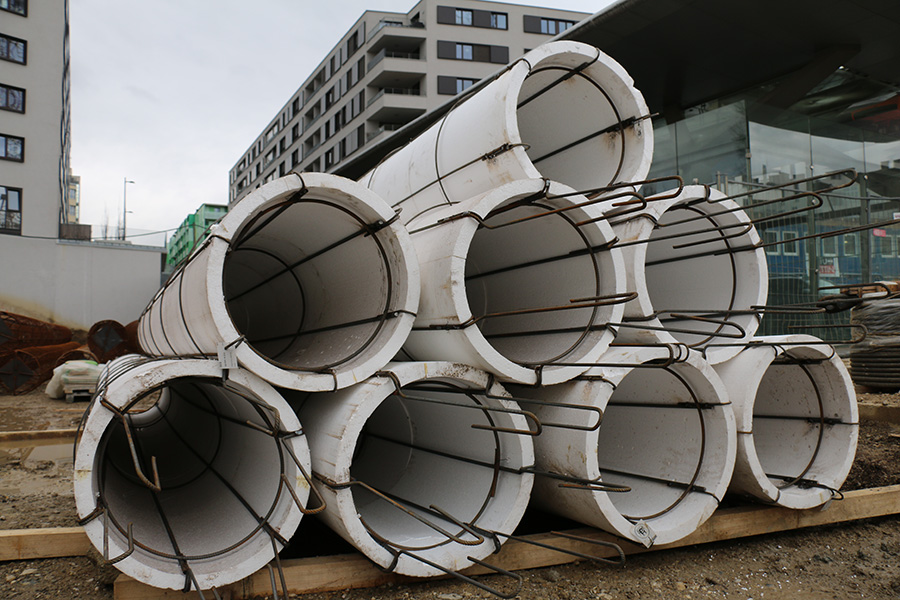 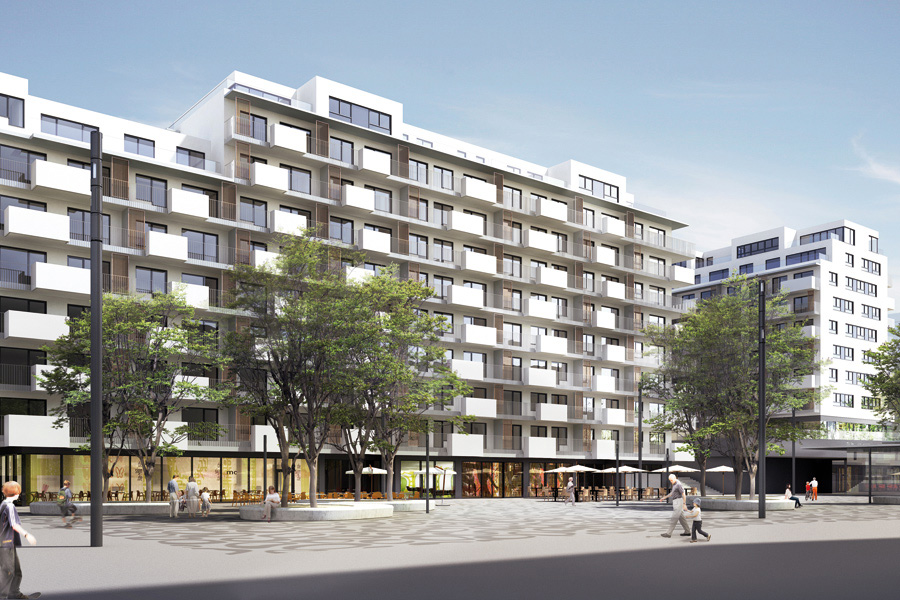 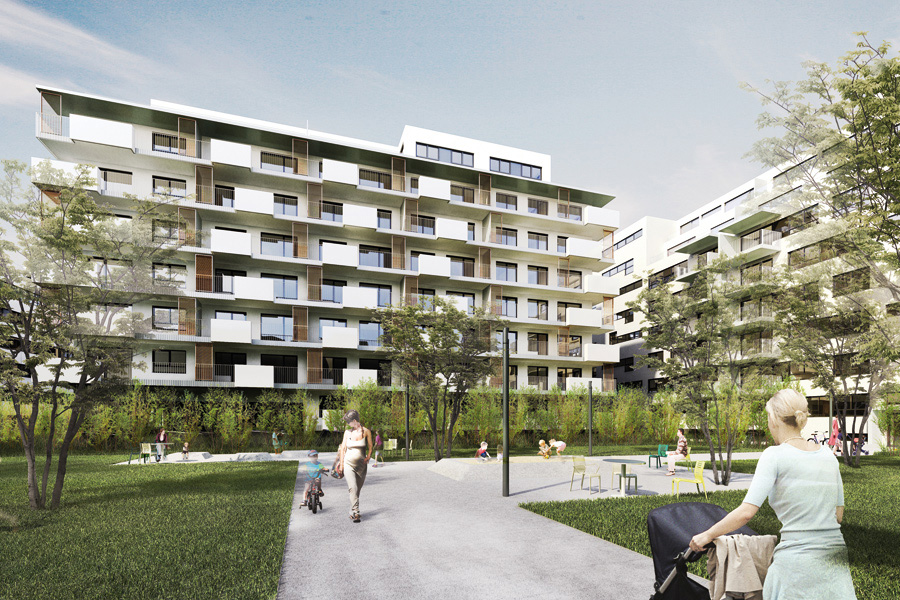