Orogel is Italy’s top producer of fresh frozen vegetables. The Group has 1590 associate producers who grow their products exclusively in Italy, as well as 2594 employees. The Group ended the 2015 financial year with an aggregate turnover of €429 million. Orogel is headquartered in Cesena, just a couple of miles from Trevi Group head office.

The business of these two companies, both leaders in their field in Italy and abroad, could not be further apart, yet they have come together thanks to the construction of the new “OROGEL 3” division.
The project involves building three new production departments, one refrigerated warehouse with a product selection department and two cold stores 30 metres high and with a footprint of 65m x 120m and 65m x 80m respectively. All this on a site of approximately 45,000 m2, of which more than 6000 m² will be used as a public green area.

The project meets the most cutting-edge criteria of environmental sustainability and technological innovation: “OROGEL 3” will be powered by a natural gas power plant which will recover heat and transform it into cooling energy; the water used in the processes will be reused, once the wastewater has been removed; the cold stores will be completely automated. Trevi, the Trevi Group division specialized in special foundations and ground engineering, won the contract to execute the foundation works of the cold store with the 120m x 65m footprint.

The foundation project, drawn up by ENSER of Faenza, consists of a mat foundation of a uniform thickness of 0.90m, on top of which will be installed the heating layer, the thermal insulation layer and the base slab for the superstructure. The soil below the mat will be consolidated by 486 concrete piles with a diameter of 800mm and working lengths of 20m, 26m, 32m and 36m, executed using continuous flight auger (CFA) technology. The piles, whose depth increases from the edge of the mat to the centre, are arranged on a rectangular 3.3m-4m x 4.4m mesh; the drilling depth from ground level is 0.6m more than the working length of the piles. The piles, which are not reinforced, will be used to consolidate the soil to reduce and control subsidence and thus have no structural function.

The work site lies on the alluvial fan of the Savio River where the first subsoil layer consists of a more or less lenticular succession of clayey silty and gravelly sandy sediment; the gravel with varying degrees of sand is found mainly towards the hill, while clay clearly dominates towards the valley. The surface soil in the area consists of clayey-silty alluviums with intercalations of sandy silt and sandy-gravelly alluviums which correspond to buried paleochannels. At a depth of approximately 9-10 metres from ground level, a clayey layer a couple of metres deep can be found almost throughout, heavily overconsolidated due to drying (paleosol).

At a depth of 25 metres, there is a first continuous layer of gravelly alluviums whose thickness goes from approximately 5 to 7 metres; at around 50 metres deep, there is a second, more consistent layer of gravelly alluviums (about 10 metres thick). A suspended water table lies in the surface soil whose level can rise to almost ground level in the wet season, while in the dry season it lies a number of metres below ground level. The results of available soil investigations were taken and surveys performed to identify the units in the table, limited to the area in question.

Trevi used the new Soilmec SR-125 HIT (HIGH TECHNOLOGY) drilling rig in CFA configuration to execute the 486 consolidation piles below the mat foundation. The SR-125, presented for the first time at the Bauma 2016 trade show, is a multi-purpose rig for bored piles with both drilling fluid to support the excavation and temporary steel casing (LDP), for continuous flight auger piles (CFA), cased auger piles (CAP) and displacement piles (DP). It can also be transformed to construct columns of consolidated soil with cement-based grout (TURBOJET). This rig was designed to deliver maximum return on investment and was based on the concepts of efficiency, power, performance and flexibility.

The operator’s cab was designed to offer maximum comfort and ease of use to increase productivity. Generous width, easy access, visibility and ergonomics are the winning features of this new cab. Thanks to the DMS (Drilling Mate System) software and a touch screen monitor (12” on this model), the operator has complete control over all the data regarding the rig’s operation and specific data on the drilling technology used. All these data can be easily downloaded at the end of the shift or sent remotely to a DMS Control Centre.

The drilling rig was designed to comply with the safety requirements of the new European standard EN 16228: platforms with vertical guards, mirrors and video cameras so the operator can control the area around the rig 360°, 10 lux lighting for night operation, as well as a new 470 kW engine meeting Tier 4 Final and EU stage IV requirements. The Soilmec team came up with special technical solutions to give this model the competitive edge as regards noise impact. The standard version of this drilling rig in CFA configuration is equipped with a 30m auger below the rotary head and a standard 6m auger extension, and can reach a depth of 36 metres.

Thanks to the stratigraphy of the site and the diameter of the piles, the rig was fitted with an 8.5m auger extension in order to reach a maximum depth of 36.6 metres as required by the project. The results recorded on the worksite confirm the rig’s working profitability: production varied from 40 to 50 m/h per column, with peaks of 56.8 m/h. The overall time taken to drill and cast a 36.6-metre column was only 37 minutes. Drilling alone took only 11 minutes (including pull-up back time). Fuel consumption was moderate, on average between 35 and 40 l/h, with minimum peaks of only 24.4 l/h, showing how this powerful rig, designed to be both high performance and extremely economical, has reached maximum energy efficiency levels.

Efforts were also made to reduce noise: with a guaranteed sound power level (LwA) of 109 dB(A), and a sound pressure level (LpA) in the cab of only 78 dB, the brand new Soilmec SR-125 is the “ best in class” if compared to the equivalent models of its competitors. Orogel, Trevi and Soilmec working together on an important project that once again endorses the leadership status of local companies in Italy and throughout the world. 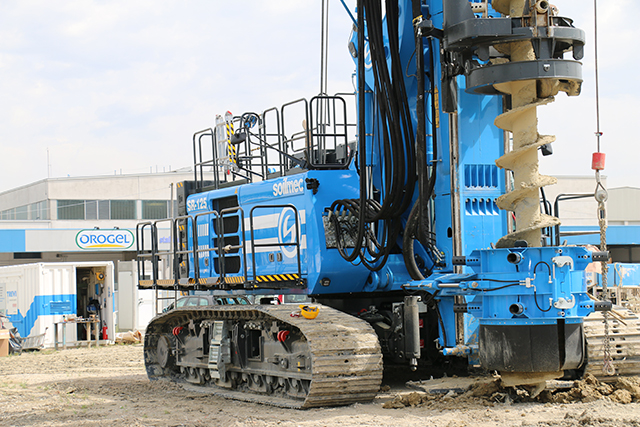 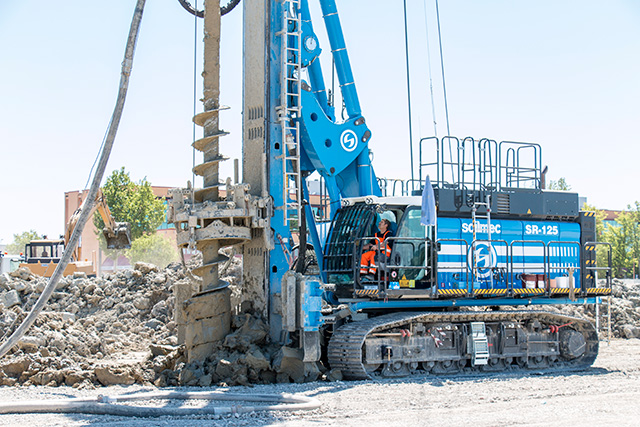 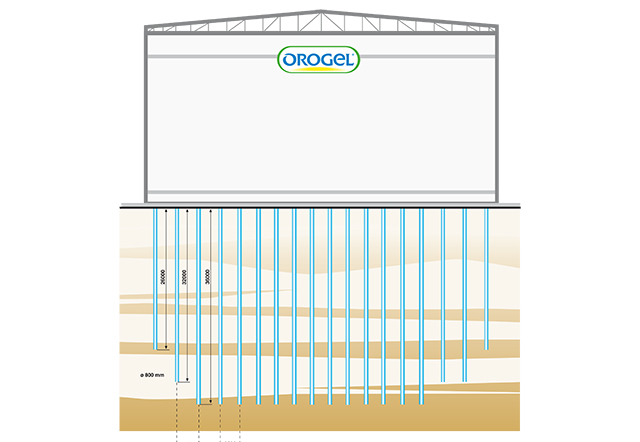 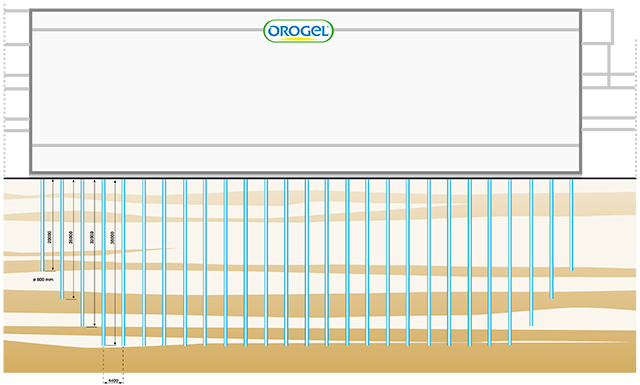